A Conversation With John Brown: Part 3

This is a continuation of A Conversation With John Brown, an attempt to learn more about the man who claims he wants to become the next Mayor of Greensboro.

Sadly, when I attempted to discuss issues with Mr Brown he responded by having his attorney, Paula A Wells of Connors Morgan, PLLC, 1175 Revolution Mill Dr. #8, Greensboro, NC 27405 send me a Cease and Desist letter.

Has John Brown threatened the News & Record or Yes Weekly for saying he co-owns Jessup Company? JWBlasingame of Conservatives For Guilford County writes that John Brown is a local business owner. What business would that be? Is John Brown's business a secret? Does he run a strip club? A brothel? Is he a drug dealer? What does John Brown not want us to know? Who campaigns as a business owner but denies owning a business? 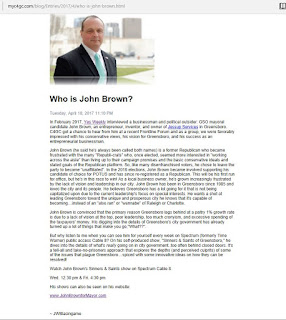 Now seriously Ms Blasingame, you are among the people who received the e-mails I sent to John Brown. I was asking the man questions, was I not? Now who in their right mind hits someone with a cease and desist letter for asking questions?

Did John Brown actually show the e-mail to his attorney?

I ask that because those of us who saw it all know the dumbest thing he could have ever done was exactly what he did.

And why would John Brown and his attorney deny his owning Jessup Company in an e-mail to me after it was reported not by one but by two print newspapers? And Jean, you know I never wrote anything bad about John Brown's wife or her company in those e-mails that I'm not currently allowed to show you because of this stupid cease and desist order.


I also don't get why Mr Brown's attorney, Paula A Wells wrote:

"Although Mr. Brown is well aware he will be the object of scrutiny because he is running for public office, and although Mr. Brown is willing to refute any and all false accusations by any means available to him during this campaign, you should be aware that any false statements that you make about Jessup Company may leave you vulnerable to a lawsuit for trade libel by Jessup Company."

You see, while Ms Wells' cease and desist order stops me from sharing the actual e-mails I sent to Mr Brown, the truth is: I never said anything about Jessup Company except to ask Mr Brown to clarify his ownership of the company and potential future conflicts of interest as Jessup Company is listed as a City of Greensboro contractor:

I mean, haven't we had our share of conflicts of interest already? Am I wrong to question the possibility?

Another thing I don't understand why Ms Wells wrote was:

"Moreover, neither Suzanne Brown nor Jessup Company are running for office.  Mr. Jones, you are free to challenge the truthfulness of Mr. Brown’s statements, as he is running for public office.  But you do NOT have the right to do so by making false statements about Jessup Company or, in fact, about Mr. Brown."

Sadly, I can't share those e-mails with you under legal threat.

But there are things I can and will tell you. But before I move on to the next part I want you to read and study this campaign handout used by Mr Brown and commit it to memory as I will be referring back to it in A Conversation With John Brown: Part 4.

You know, I've never needed an attorney. I successfully fought a trumped up embezzlement charge in my mid twenties and did so without an attorney. Even when I successfully sued the City of Greensboro I didn't hire an attorney. But I have always heard you should never lie to your attorney. Do you think Paula A Wells would have sent me that letter has she known everything I'm going to tell you before I end this series?

Because if she did know these things.... Well, you know.