BJ Barnes IS A LYING SOB

You know, I've long supported BJ Barnes, voting for him time and time again right up to and including his last election which he lost because he went over the top politically. And in his most recent Facebook post you can see how he will make up any lie that suits his agenda. 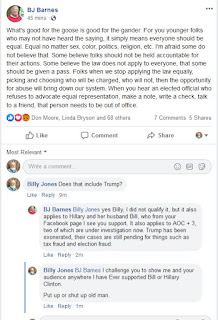 I have never supported Bill or Hillary Clinton

I don't even know who Mr Barnes is running against but it is apparent he is willing to tell any lie necessary to become Mayor of Stokesdale, North Carolina.

He goes on to lie again: 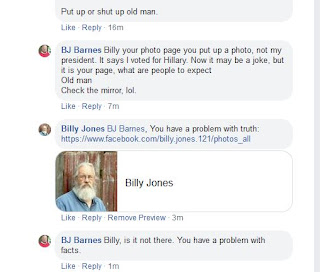 You see, I voted for Ross Perot-- twice. I hated Bill Clinton when he was Governor of Arkansas and I was having to deal with what I believed was the most crooked law enforcement agency in the nation-- the Arkansas DOT-- on a weekly basis while working as a long haul trucker. And I despised Hillary just as badly.

Honesty above ideology is what I live by. There was a time when I thought BJ Barnes lived that way too.

Update: July 17, 2019 9:41 AM It appears that Mr Barnes has deleted or hidden my comments in an attempt to hide his lies: 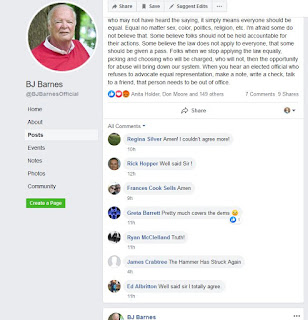 If BJ Barnes were already elected to Mayor of Summerfield it would be illegal for him to delete such comments. Is this an example of how he plans to run Summerfield, in secret, behind closed doors, and in fear of criticism, striking out at people for nothing more than asking simple questions, then hiding the evidence of his actions.

This one will never go away Mr Barnes. Not only are you a liar but politically you are a coward.