According to Matt Brown, Greensboro City Council, Kathy Manning and Walker Sanders, Comedian "Nate Bargatze", who will appear at the Tanger Center on Sunday, May 3, 2020, will sell 330 parking spots at $18 a piece to patrons before the performance 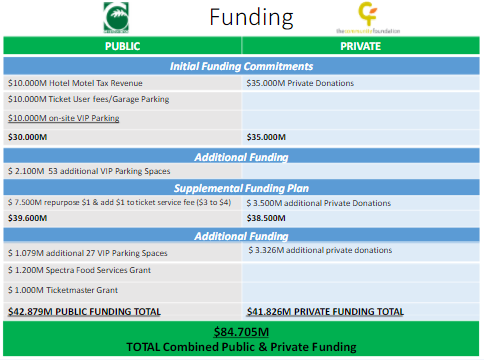 On December 19, 2017, Greensboro Coliseum Director Matt Brown, the City's highest paid employee, told City Council the Steven Tanger Center for the Performing Arts (STPAC) would be paid for in part by patrons paying $18 a piece for 330 VIP parking spaces 150 times per year.

The same math was sent by Brown to Kathy Manning, Co-Chair of the Development/Marketing Task Force and Chief Fundraiser for the Center, and Walker Sanders, president of The Community Foundation of Greater Greensboro.

Manning's husband Randall Kaplan, who served on the STPACs Economic Impact/Feasibility Task Force, is set to profit from the venture with a more than $30 million taxpayer funded parking deck under a new hotel down the street.

There were 488 free on street parking spots within 1,200 feet of the site, not counting the VF and the Marriott parking across the street, and another couple thousand in two more parking decks on the way.

The Bellemeade Deck across the street has 1,276 spaces

DPAC charges $5 per car in a similarly proximate deck.

Manning and Walker among others purposefully misled our community and have conspired against Greensboro's taxpayers for personal profit.

City Council voted to for this project knowing this information or should have, and/or willfully ignored data, violating their fiduciary duties to Greensboro's taxpayers, and should be removed from office.
.
.
Comedian Nate Bargatze coming to Tanger Center May 3

Los Angeles, CA (November 12, 2019) – Following the continued success of his Netflix special, The Tennessee Kid, comedian, actor and writer Nate Bargatze is extending his best-selling Good Problem to Have stand-up tour into 2020...

Bargatze’s comedy is both clean and relatable, evident in his six appearances on The Tonight Show Starring Jimmy Fallon following four appearances on Late Night with Jimmy Fallon. He appeared on Conan four times, was a recurring guest on @midnight, and had his own Comedy Central Presents in 2011. Off-screen, Bargatze was part of Jimmy Fallon’s Clean Cut Comedy Tour, and has done live shows for the troops in Iraq and Kuwait five times. He regularly performs at Bonnaroo, SXSW, Oddball Comedy Festival, Sasquatch, Clusterfest, and the JFL Montreal Comedy Festival, where he’s received critical acclaim multiple years in a row. Bargatze is also in production on a pilot for ABC, which he created and stars in...

Since July 2016, the City of Greensboro increased its budget by $46.9 million per year, more than 11%, while overall taxation increased by about 15% to pay for it

City of Greensboro raises taxes by 7.5%, but most don't know, as our local media didn't tell anyone