$13.179 million / 331 VIP parking spots = $39,816 in expected revenue for each space to pay for both interest and principal over an unknown number of years

The actual interest rate should probably be higher, as the property and the revenues are the only collateral backing up the debt, as opposed to a general obligation bond backed by tax revenues

The paid consultant said the center could host about 149 events per year after 3 years, some of which obviously couldn't get VIP parking money; 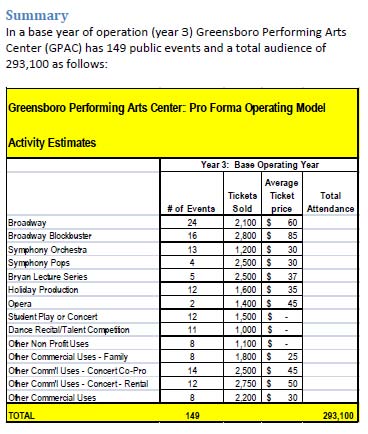 The tax increases on downtown parking are to pay for Roy and Randall's $60 million worth of parking decks and the $10 million on the second line of the first graphic, all of which will reduce the demand for the VIP parking at the STPAC

If the math doesn't work, we have been lied to

If the math doesn't work, Randall and Roy are taking millions from the public
.
.
Control fraud occurs when trusted officials in positions of responsibility subverts an organization and engages in extensive fraud for personal gain.

The Mayor, City Manager and top department heads of of the City of Greensboro, are uniquely placed to remove the checks and balances on fraud upon the public.

Accounting tactics can position these executives in a way that allows co-conspiritors to engage in accountancy fraud and embezzle money, hide shortfalls or otherwise defraud investors, or the public at large. A control fraud will often obtain "investments that have no readily ascertainable market value", and then shop for appraisers that will assign unrealistically high values and auditing firms that will bless the fraudulent accounting statements.

Some control frauds are reactive in the sense that they turn to fraud only after concluding that the business will fail.