Earlier today I posted the following to Facebook in response to the article, Contaminated foods from China flooding into the U.S. under the ‘Organic’ label by Natural News: 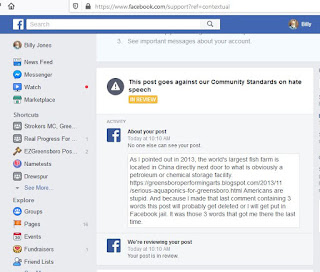 As I correctly predicted I have been placed in Facebook Jail, banned from interacting with others on Facebook for 7 days.

This isn't the first time the Facebook sensors have failed to take words into proper context.

Is this the work of robots?

I don't thing so.

The reason I say I don't think so is because there are at least 2 other places on Facebook where my comment, "Americans are stupid" still remains. One posted just moments before I made my post in the comments on a friend's post about the same article I was commenting on.

But if the problem is robots then why is context so hard to program?

Can Facebook not tell that I am posting from Greensboro, North Carolina?

Can Facebook not look at my vast history of posts, combined with where I am posting from and determine that odds are very good that I am an American, and that as such my comment is not hate speech?

As for Facebook's review process? Sometimes they get around to it but I'm still waiting on one from January 28, 2019.

And since I can't post this to Facebook and no one else will ever bother to do so, no one will know what happened.

Update: 31 December, 2019 Since contacting Facebook is impossible I've made an effort to contact Community help. Taking it to the streets... 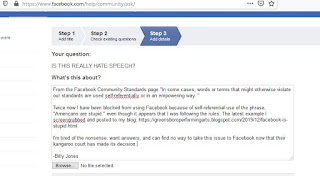