The City of Greensboro won't/can't produce a document confirming $41,826,000 of private contributions for the TPAC listed on the application for the debt approval,  meaning the application filed by Greensboro with the N.C. Local Government Commission has a bunch of numbers on paper, not backed up by underlying documentation or confirmed confirmation;

"In response to your public records request for the application with the Local Government Commission for approval of Bonds and Trust Agreement for financing the Steven Tanger Performing Arts Center, the City of Greensboro Finance and Administrative Services has provided the attached Application for LGC Approval of TPAC Limited Obligation Bonds";

Questions asked in response to what was provided in the public records request;

"Are there any attachments?
.
.
"Thank you for your email! I have contacted the City of Greensboro’s Finance and Administrative Services concerning the records that you have requested. I will email them to you as soon as the records are ready.

Kurt Brenneman, PIRT Administrator
Libraries"
.
.
From a Roch Smith City of Greensboro records request on STPAC funding; The City doesn't really know how much of the private donations received are actually in hand, and Walker Sanders of The Community Foundation of Greensboro appears to have not released the information while making investment fees on an unknown amount of assets. 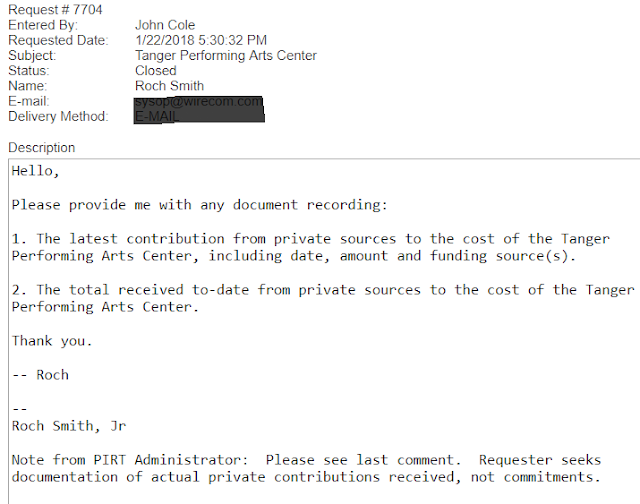 "Manning and Walker Sanders, the president of the Community Foundation,
also announced that they had met their goal
of raising $38.5 million from private donors."

The venue originally was projected to cost $65 million,
with $30 million coming from the city of Greensboro and $35 million from private donors."

§ 11-1. Oaths and affirmations to be administered with solemnity

Discovery of truth on TPAC didn't happen, and if it did, voting for the measures was a violation of the City of Greensboro oath of office and an unfaithful act. 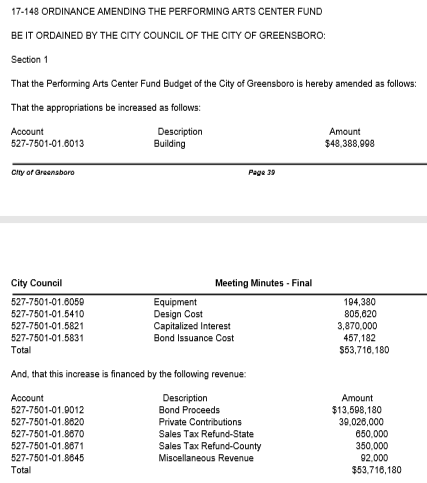 City taxpayers are going to borrow $43,450,000, which will cost $65,987,494.98, and no one at the City of Greensboro government level is able to produce any information as to where the private donations are, or what the money is invested in

Ethical Responsibilities of the Governing Body of the City of Greensboro; 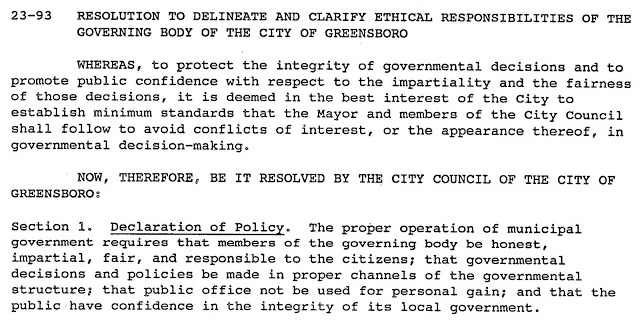 Any City Council member who voted for a project without confirming where all the money was coming from violated Greensboro's City Charter
.
.
About the Local Government Commission

In 1931 the North Carolina General Assembly established the Local Government Commission to help address the problems in local government finance caused by the depression.

Asistance to local governments and public authorities in North Carolina. It is staffed by the Department of State Treasurer and approves the issuance of debt for all units of local government and assists those units with fiscal management.

The primary mission of the LGC is focused in three areas of responsibility and authority. First, a unit of government must seek LGC approval before it can borrow money. In reviewing each proposed borrowing, the LGC examines whether the amount being borrowed is adequate and reasonable for the projects and is an amount the unit can reasonably afford to repay. Second, once a borrowing is approved, the LGC is responsible for selling the debt (or bonds) on the unit’s behalf.

While state agencies in some other states are charged with approving local government debt; it is the combination of the power of approval with the power of sale that makes the LGC unique in the nation.

https://www.nctreasurer.com/slg/Pages/Local-Government-Commission.aspx
.
.
A financing update for the now $90 million Steven Tanger Center for the Performing Arts (STPAC), of which the City won't provide any details of underlying math, and won't provide anyone who knows to ask about it;

In response to your public records request #7470 concerning any data or information concerning anticipated parking revenue impact associated with downtown Greensboro’s new performing arts center, relative to the creation of two new parking decks within the same area, the City of Greensboro Department of Transportation responded that it does not have any records responsive to your request."
Posted by Abner Doon at 10:58 AM