Well in Guilford County they're not. As a matter of fact, despite the propaganda from Partners Ending Homelessness Executive director Brian Hahne:

You see, while using terms like 'chronically homeless' Mr Hahne is able to paint a pretty picture but the truth is something altogether different. Since Partners Ending Homelessness announced their plan to end homelessness in Guilford County within 10 years, back in 2007 the number of homeless children in Guilford County increased by 48% as of 2012.

From Fox8 linked above:

"As for why the numbers are going up, Darryl Kosciak with Partners Ending Homelessness said part of the reason is due to better counting practices."

Yeah, right. Here's Partners Ending Homelessness' own records from 2006 until 2011 as published in the News & Record. No improvement there. 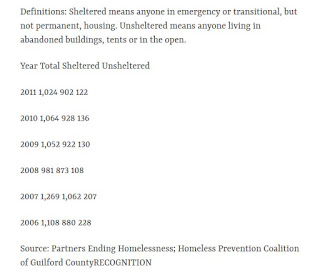 But in that same article it was claimed they were making progress even as the numbers creeped higher. Even the title read, "Guilford’s homeless making progress".

Lies. Lies betting that you will read no more than the title and assume it to be truth.

Yes there was a recession but they still lied.

Meanwhile Spectrum News is reporting Homelessness On The Rise In Greensboro:

"The Interactive Resource Center says homelessness in Greensboro is at a crisis level.

Those people are finding shelter in cars, motels, and tents in the woods. They're asking for the city's help."

Partners Ending Homelessness states there were 586 people homeless as of January 2019. That's for the whole of Guilford County, Greensboro, High Point, and the rest of the county.

What does the Interactive Resource Center say?

"Every night in Greensboro, more than 900 people go to sleep homeless — in shelters, under bridges, in the woods or in cars."

And the IRC says a whole lot more like

"According to the National Coalition to End Homelessness, nearly half of all people experiencing homelessness are employed."

"In Greensboro, most panhandlers are not actually experiencing homelessness, which is why it is important to support an organization like the IRC that supports the people who truly need it."


Who do you believe?

In 2017 AmericaCorps reported that in Greensboro alone:

"On any given night, over 1,000 people will be living on the streets or shelters in Greensboro."


While in that same year Partners Ending Homelessness reported that Guilford County as a whole had 573 homeless people.

Now how is it that almost twice the area which included the other area had roughly half as many homeless people in the same year?

And folks, I only showed you a few instances in one city, in one county. The internet is full of counts published by non profits and government agencies alike that simply don't jibe with the year to year data published by Partners Ending Homelessness, which, by the way, is part of a nationwide public-private partnership operating in cities everywhere.