In 1999, after working at J. C. Bradford on the corner of Elm and Cornwallis in Greensboro, North Carolina, Aenbr Nood, the son a Phd. Nuclear Engineer who taught him what a normal Price to Earnings ratio was supposed to be for a publicly traded stock, found the US financial markets way out of whack.

When the top topped in 2000 after surviving the Y2K scare, which ended up as a relatively non-event, he set up his investment portfolios at Merrill Lynch in downtown Greensboro to sell stocks if they fell by a certain amount, most of which was about 10% down from peaks, thinking just about everything equity was way overvalued.

Instead of becoming a hero, Aenbr became a zero to his co-workers who didn't get their clients out, especially after Nood started bringing in a lot of new assets under management and showing off about it.

Aenbr got fired in early 2001, after getting into a confrontation with a connected local politician and Investment Broker competitor at work.

That's what got him interested in Greensboro politics, which led him to find a corrupt crony cesspool of grifters controlling our community's government in 2009, after he successfully navigated the following financial crisis.
.
.
On 3/13/2007, Aenbr Nood purchased shares of SDS in his personal account.  SDS is a leveraged inverse Exchange Traded Fund (ETF), whose objective is to rise 2% for every 1% the S&P 500 falls.  In the fourth quarter of 2008 he sold SDS in two blocks, realizing a total gain of about 51%.

“Shorting” means making an investment that increases in value when other “long” investments fall.

In July, 2007, he shorted Bear Stearns and closed the position with a 97% profit on 3/7/2008.  He shorted Pulte Homes, KB Homes and Lennar, and realized about a 65% gain.  During 2008, he executed short trades in Goldman Sachs, Capital One, MBIA, Merrill Lynch, Moody’s and State Street Corporation, as well as buying and selling inverse ETF’s covering financials and real estate.

The solid blue lines on the performance report charts show how much more these clients made and\or lost compared to the dotted lines below which represent selected indices at the time; 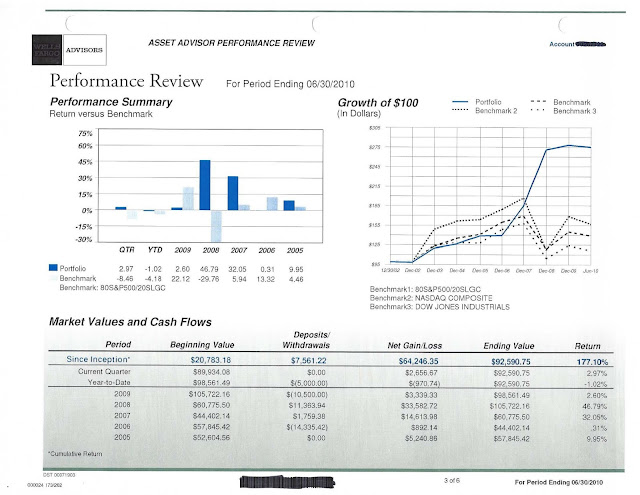 He was one of the only advisors at Wells Fargo who did well in the downturn.  Many of his clients entered into many similar trades at relatively the same time as the account performance reports show, which illustrate some of the best un-audited Asset Advisor performance reports in his book of business as of June, 2010. 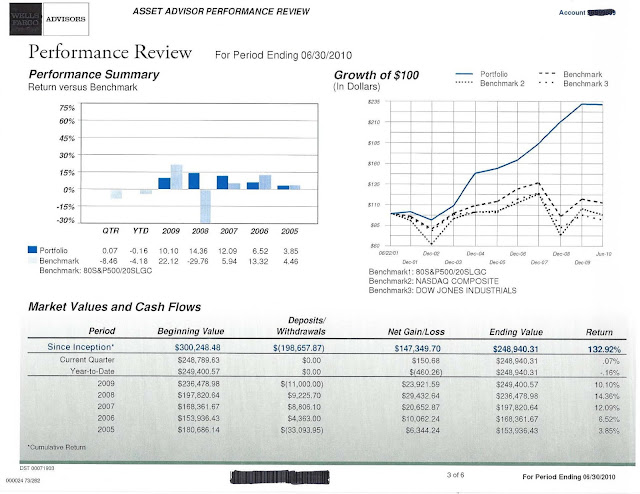 He worked as a financial advisor since 1993, taught CPA and attorney financial ethics in North Carolina for 10 years. 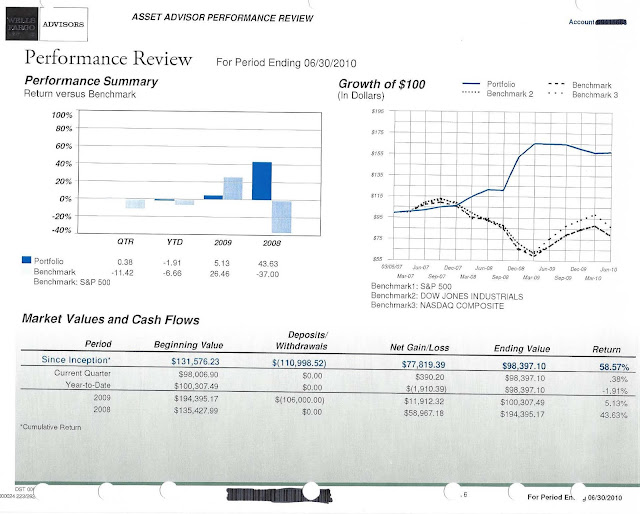 On 3/31/2009, total assets under management in Aenbr's book of business was $35,595,572.83, including both fiduciary and non fiduciary accounts.  He had more than 60 Asset Advisor accounts, where financial advisers are legally obligated to act in the best interest of clients. 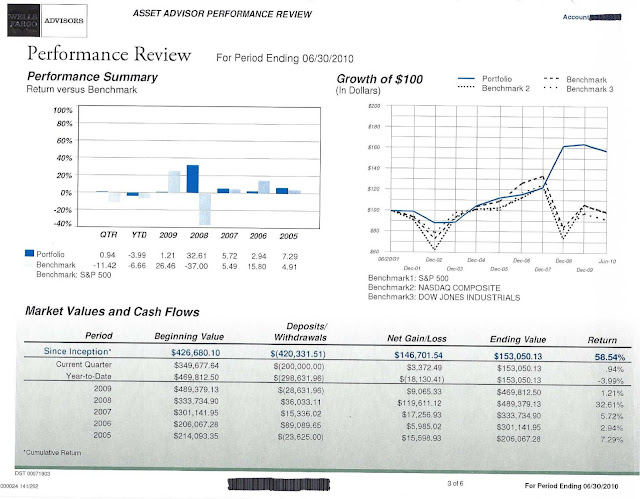 These accounts were governed by the Investment Advisers Act of 1940, which requires stock brokers be held to fiduciary standards for advisory accounts, requiring financial advisers to act solely in the best interest of their clients.  Advisers must disclose any conflict, or potential conflict to their clients prior to and during a business engagement. 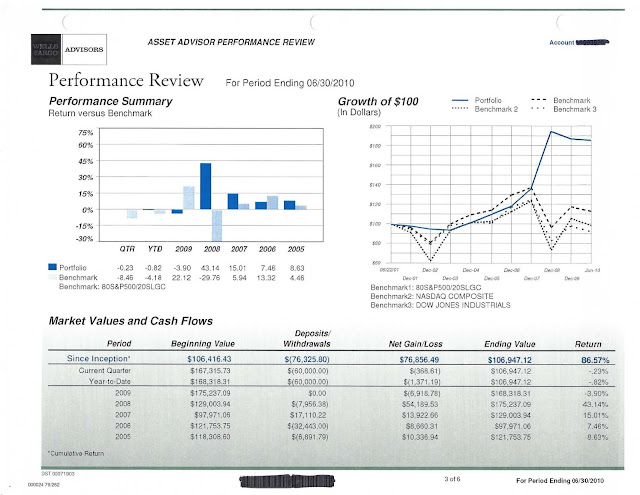 Both Wachovia and Wells Fargo borrowed from the Federal Reserve's Term Auction Facility (TAF), whose loans were not disclosed to the public until December 1, 2010, subsequent to congressionally mandated legislation and civil legal action.

Wachovia, Wells Fargo, KPMG, the Securities and Exchange Commission (SEC), The Financial Industry Regulatory Authority (FINRA) and the Federal Reserve amongst others illegally misled Wachovia’s shareholders.  Nood disseminated inaccurate advice to clients whose accounts were governed by the Investment Advisors Act of 1940, based on information audited by KPMG and withheld by Wachovia and Wells Fargo’s executive management.  His clients and Wachovia shareholders lost as insiders profited from material undisclosed information.

He executed trades unaware of the Federal Reserve’s secret loans and the Treasury’s largess, as the companies he worked for as well as many others did not disclose material information in their securities filings, even though insiders profited from equity and stock option transactions.

After the first half of 2009, his personal and client investment performance suffered as markets went relatively strait back up in defiance of fundamentals and common sense, as many who were aware of undisclosed material information profited. 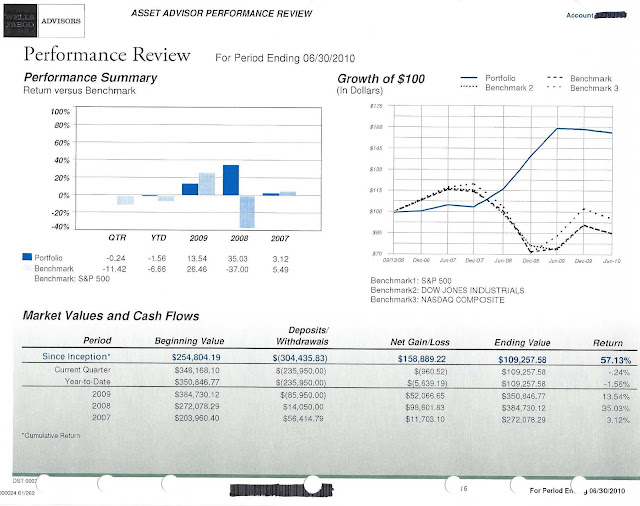 As he did not understand what was happening at the time, Nood took many client accounts to cash to curtail losses.  Most of his clients did not participate in the run up in the financial markets, which partly rose in response to massive undisclosed liquidity provided by the Federal Reserve. 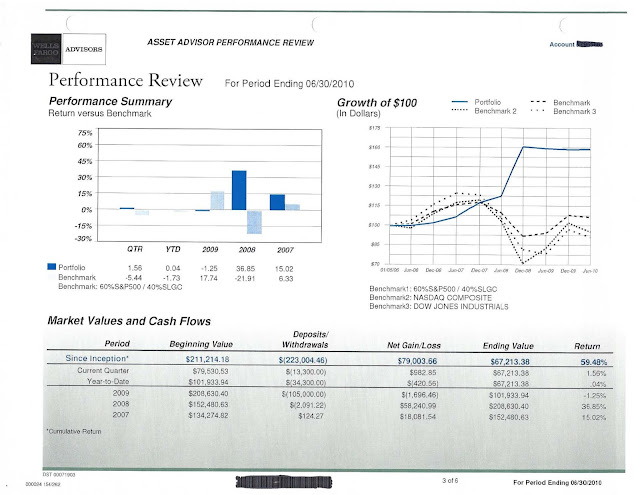 According to Bloomberg News, on March 27, 2008, Wachovia borrowed $3.5 billion from the Federal Reserve’s Term Auction Facility (TAF) which was not disclosed to the firm’s shareholders and not reported in the company’s legally required SEC securities filings. Bloomberg compiled and reported “21,000 transactions” from 2008 and 2009, ...obtained under the Freedom of Information Act” from the Federal Reserve, on August 22, 2011, including undisclosed loans to Wachovia and Wells Fargo amongst others which appears to include BB&amp;T and Ally Financial, formerly GMAC.


The information has been taken down by Bloomberg

Not reporting Federal Reserve material borrowings, credit lines, terms and interest rates is a violation of Sarbanes/Oxley laws, and not informing employees who managed advisory accounts was a violation of fiduciary duties described in the Investment Advisers Act of 1940.

KPMG was/is the auditor for both Wachovia and Wells Fargo. 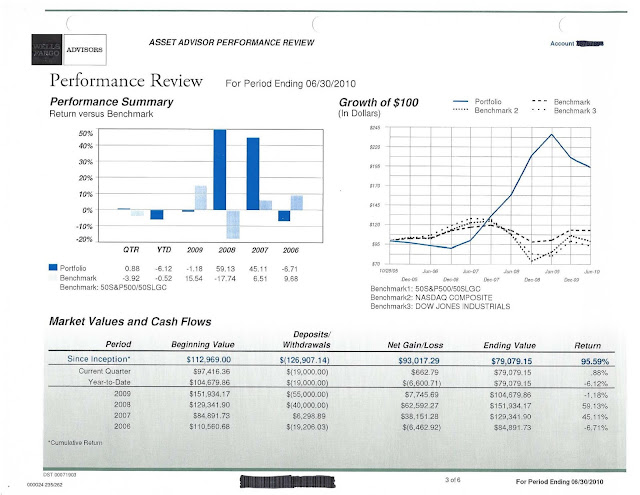 An SEC interpretation states: "Many financial institutions, such as thrifts and banks, are receiving financial assistance in connection with federally assisted acquisitions or restructurings...If these or any other types of federal financial assistance have materially affected, or are reasonably likely to have a material future effect upon, financial condition or results of operations, the [Management Discussion and Analysis] should provide disclosure of the nature, amounts, and effects of such assistance..." http://www.sec.gov/rules/interp/33-6835.htm 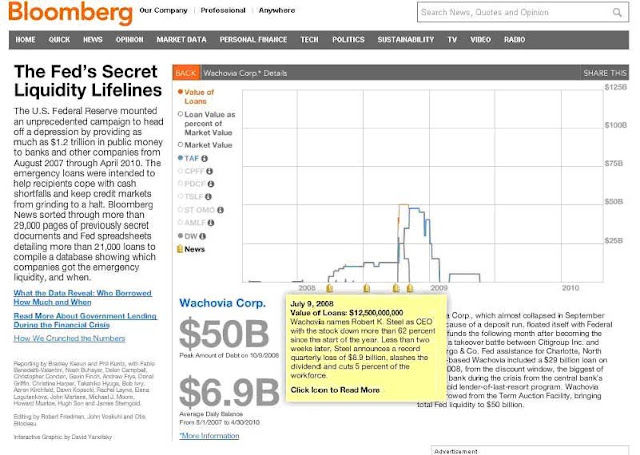 On July 22, 2008, Wachovia’s new CEO Robert Steel purchased 1,000,000 shares of Wachovia’s stock as the company’s TAF borrowing reached $12.5 billion, which appears not to have been disclosed in securities filings.

If Mr. Steel was “the principal adviser…on matters of domestic finance and led the [U.S. Treasury] department's activities regarding the U.S. financial system, fiscal policy and operations” before becoming Wachovia’s CEO in July, 2008, how could he not have known and acted on undisclosed material information?

Mr. Steel was at least aware of Wachovia’s Federal Reserve loans since July, 2012, if not undisclosed loans to multiples of other firms.

The Federal Reserve approved Wachovia’s merger with Wells Fargo on October 12, knowing of unreported Fed loans to both companies.

Wells Fargo's purchase of Wachovia closed on December 31, 2008.  The Wall Street Journal reported "about $100 billion in wealth disappeared from the Carolinas alone when Wachovia collapsed." 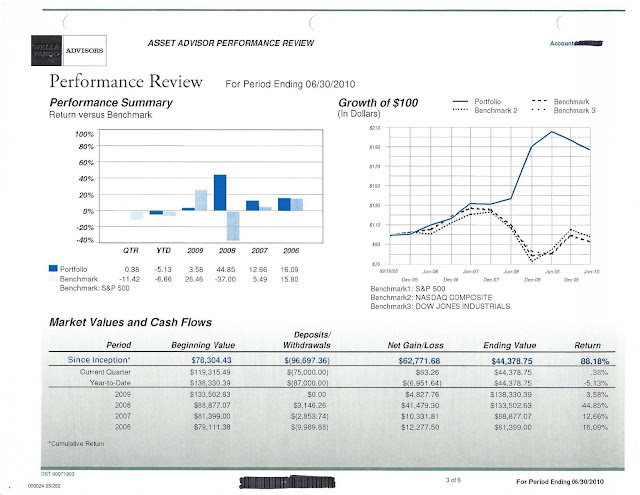 Wachovia’s shareholders were misled by Wachovia and Wells Fargo’s management, KPMG, and at least the Federal Reserve and the U.S. Treasury Department.  The Sarbanes-Oxley Act of 2002, which he have taught in ethics courses for CPAs and others over the last 10 years, requires executive officers and directors to personally attest that SEC securities filings have been personally reviewed and financial statements fairly present, in all material respects, a company’s financial condition.

Financial information in press releases or other public disclosures must not “contain an untrue statement” or omit a statement of  material fact necessary to make statements not misleading. 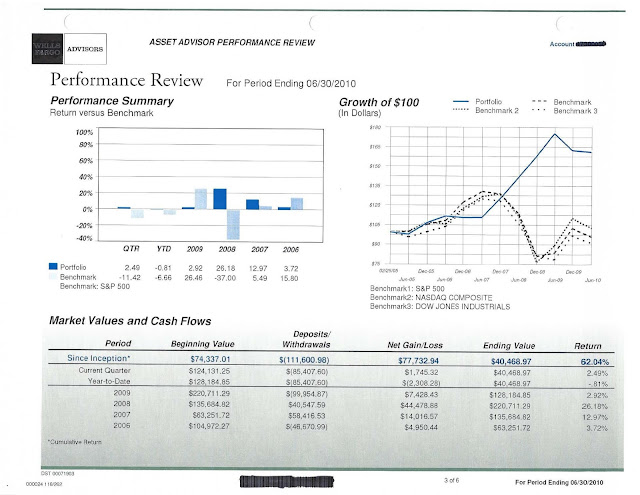 After not reporting Federal Reserve loans and purchasing Wachovia’s shares while in possession of undisclosed material inside information, the CEO wrote "I, Robert K. Steel, certify that:  I have reviewed this Quarterly Report ...for the quarter ended September 30, 2008 of Wachovia  ...this report does not contain any untrue statement of a material fact or omit to state a material fact necessary to make the statements made, in light of the circumstances under which such statements were made, not misleading with respect to the period covered by this report..." 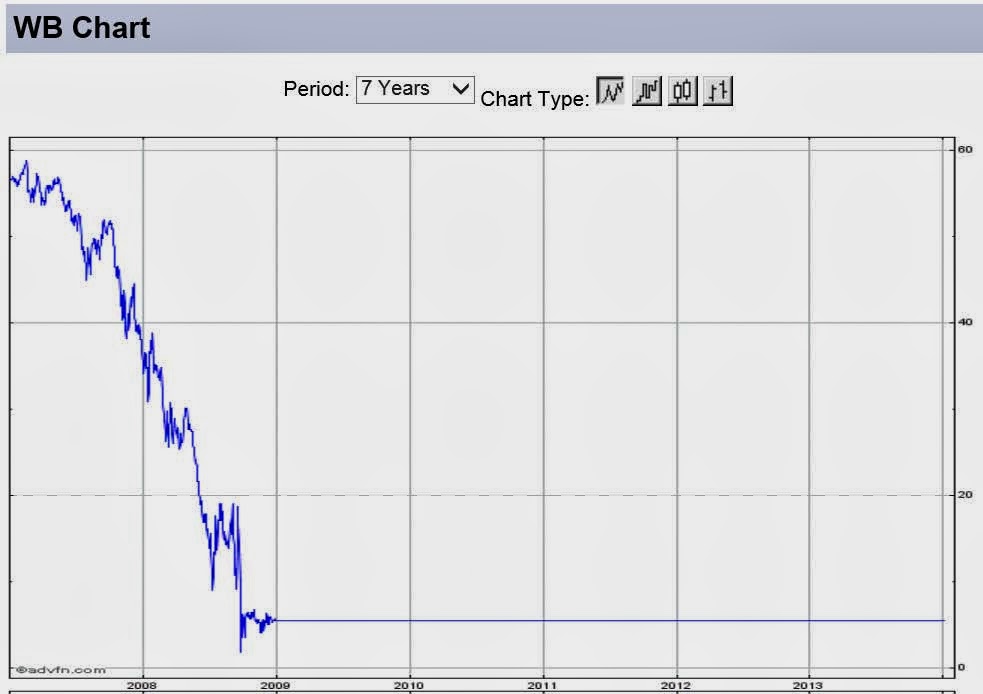 After most of Wachovia’s shareholders were locked into losses on completion of the merger, Mr. Steel ended up far better off knowing what most didn’t.  On June 22, 2010, Robert Steel was appointed Deputy Mayor for Economic Development by New York City Mayor Michael Bloomberg.  According to Morningstar data, Mr. Steel owned 601,903 shares of Wells Fargo in 2010, which would be worth $20,446,644.91 as of October 26, 2012.

The CEOs and CFOs of America’s largest banks certified their reports didn’t contain any material misstatements or omissions.  External auditors attested to the assessments. 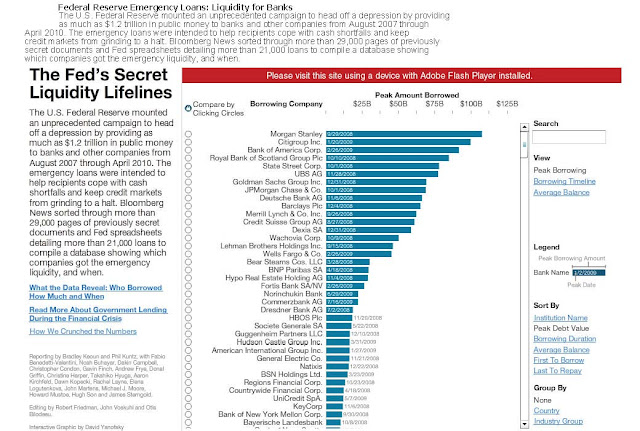 Some banks which received Federal Reserve loans disclosed details in their securities filings, like Union Bank &amp; Trust and Peoples Bank of North Carolina.  Wachovia’s, Wells Fargo’s and multiples of other firm's securities filings did not account for the loans, total credit lines, interest rates, collateral pledged or amounts of loans outstanding as other banks did. 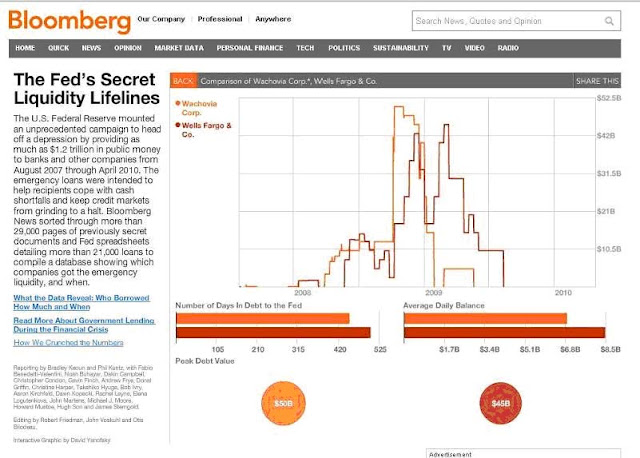 On Nov 28, 2011, Bloomberg published “Secret Fed Loans Gave Banks Undisclosed $13B,” which stated “The Federal Reserve and the big banks fought for more than two years to keep details of the largest bailout in U.S. history a secret.  ...Bankers didn't mention that they took tens of billions of dollars in emergency loans at the same time they were assuring investors their firms were healthy.”

Bloomberg estimated the profits from the undisclosed Federal Reserve Loans was $878.2 million for Wells Fargo, and $149.4 million for Wachovia.

Aenbr reported the information through Wells Fargo’s internal anonymous/confidential ethics line in early December, 2011, with an external email address and phone number, after which he was contacted on multiple occasions by investigators on my company email and phone.


Most of the staff at Greensboro's News and Record knew and did nothing.

The contact evidence was provided to Wells Fargo executives in violation of Nood's confidentiality, which was sealed by Judge William Osteen, at Greensboro's federal court.


The former Sheriff of Guilford County knew and did nothing.

On January 4, 2012, an email in response to his ethics line complaint from a Senior Investigative Agent and Vice President from Wells Fargo Corporate Investigations said “Please confer with your manager if you feel the need, but our case is closed.”


Greensboro's current and former mayors knew and did nothing.

Realizing his anonymity was compromised and his family’s safety at risk after the first internal ‘investigation’ was ‘closed’, Aenbr took the issues to his local manager, after which Wells Fargo's executive management enlisted an outside ‘independent’ investigator who promptly found no merit to his assertions, William Lindsay Osteen Jr., United States District Judge of the United States, District Court for the Middle District of North Carolina sealed the evidence from public disclosure, protecting the financial industry and the nation's plutocracy.

Thinking he could mitigate personal risk by contacting regulatory authorities, Aenbr filed with the Securities and Exchange Commission (SEC) and the Financial Industry Regulatory Authority (FINRA) DC Office of the Whistleblower amongst others which went nowhere.  He then filed with the NC Secretary of State Securities Division, who investigated and referred files to Atlanta's SEC and FINRA offices.

American regulatory authorities wouldn't say whether a case exists or if a case is opened or closed, even though Nood contacted the government during and after interactions with Wells Fargo management, leaving himself and loved ones at risk of reprisal.


Congressman Mark Walker knew and did nothing.

Wachovia and Wells Fargo’s executive management misled taxpayers, shareholders and Congress concerning material information.  In doing so, executives violated fiduciary duties to the firms financial advisers and their clients while gaming executive compensation at the expense of Wachovia shareholders.

The US Government and regulators approved of insider trading and securities fraud involving Federal Reserve loans no one knew about except for a select few including many at the top who profited.

After Aenbr made everything public, the powers that be had little interest in addressing the issue, which would implicate most of the boards and executives at the largest financial institutions, their auditors and our captured regulatory infrastructure.

And it's happening again.
Posted by Abner Doon at 9:14 PM