An internet search of "Janet Pate" and "Koury"
shows not one local 'mainstream' news outlet reporting on the story
since the news became public on March 1, 2019

"A neo-Confederate activist who is depicted making racial slurs in a video circulated by antiracists is no longer employed by Koury Corp., a prominent Greensboro real-estate development company.

Janet Spainhour Pate maintained the Facebook page for Confederate Memorial Tour, a kind of scrapbook chronicling visits by Pate and a friend to various Confederate memorials across North Carolina and Virginia.


According to BrightScope, Janet Pate was the named administrator
of Koury's $16 million 401k plan as of 2017

...After hearing about the decision by then-UNC-Chapel Hill Chancellor Carol Folt to remove the remnants of Silent Sam on Jan. 14, Pate showed up at the scene and live-streamed the event with a running monologue to express her disgust.

...“There you go, y’all,” Pate told her viewers. “All these years that sat there and then some n***er comes up and spreads paint all over it, and the liberals go mad.”


Remaining unknown is how long Pate worked at Koury,
and for how long her employers where aware of her racist views,
as not one mass media news outlet chose to cover the story

...Pate told her viewers she would turn around the camera “so you can see all these little whores at UNC, queers, celebrating, taking pictures. I guess they don’t have to go to class. Like I say, it’s easy to go to class here. They can stay up all night, get drunk, screw around, have abortions.”

Later, she continued, “Just to let you know, the desecration of a memorial to the dead only proves this school’s going to turn into a ghetto, that’s all it is. It’s the ghetto. All these kids study, it’s partying, tearing up shit, raising hell. That’s what it is at UNC, y’all, making their own rules, mob rule.”

...“I’m gonna tell you, people, it’s next to a war [sic],” Pate said. “But here you go. All right everybody, that’s about all I want to hear of that bullshit. But this is what we’re up against. Gonna sit back and take it? But they think they’re being funny. You hear that? And them n***ers are able to come to school here because of Donald Trump. Yay.”


It took seven days for Greensboro's News and Record
to print the names of our Koury supported legislators who voted for HB2,
and it has now been 8 days since our local for profit paper
hasn't done a story on the Koury/racism related issue

The campaign to shame Pate didn’t truly take off until Thursday, with the release of a third video and the unidentified antiracist activists’ disclosure that Pate worked for Greensboro-based Koury Corp. The footage was picked up by the Atlanta Black Star newspaper, which circulated it on Facebook and Twitter, resulting in upwards of 32,000 views. By the end of the day, the Confederate Memorial Tour page and Pate’s LinkedIn page identifying herself as the payroll manager at Koury Corp. had been taken down. On Friday, the company declined to confirm Pate’s position.


They brought in damage control management,
which means she wasn't a maid at the convention center,
but most likely close to Koury's top brass;

...Monty Hagler, a public relations specialist handling the controversy for Koury Corp. said in an email to TCB: “I can share with you that the phrase ‘taken appropriate action’ includes the fact that the employee [is] no longer employed at Koury Corporation.”
.
.
From Brightscope's 2017 Koury Corp 401k information;

Gordan Craig was listed as the plan's Administrator in 2016;

"Neo-Confederate activist Janet Spainhour Pate was fired from her job after a video circulated online of her making racist comments.

Janet Spainhour Pate had to have been relatively well known to Koury Corporation executives,
as she was put in charge of their money invested in the company's retirement plan

...The video went viral online and Pate’s workplace was identified. The video reached more than 32,000 viewers. Once her job caught wind of the video and the use of her racist language she was fired."

https://cf.ncsbe.gov/CFOrgLkup/ReportSection/?RID=156834&SID=STA-V4HE73-C-002&CN=FRIENDS%20OF%20TRUDY%20WADE&RN=2018%20Second%20Quarter
.
.
On Friday, April 1, 2016, I wrote "Is Koury Corp's Stephen Showfety (Koury Convention Center and Grandover CEO) going to ask Phil Berger for his money back?", as Berger and Trudy Wade among others advocated and voted for HB2, before which Koury Executives donated money to elected officials who were advocating for discrimination.

From Yes Weekly in 2014; "Pay to get paid and the City of Greensboro; Koury Corporation"


Disgusted with Gov. Pat McCrory and our elected officials who supported House Bill 2...

Susan Ladd at the N&R 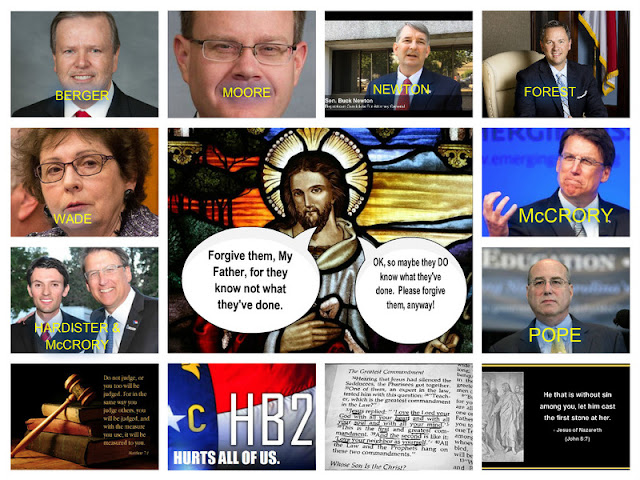 Wednesday, March 30, 2016; A few Trudy Wade Campaign Contributors who haven't asked for their money back as far as I know