City of Greensboro raises taxes by 7.5%, but most don't know, as our local media didn't tell anyone

The City’s last property tax increase was 11 years ago, the Fiscal Year 2007-08 budget.

City Councilmembers say this year is the first time property taxes have been raised in over ten years, but that doesn’t mean that it’s true.


The City, City Council and most of our local press
misled/lied to Greensboro's taxpayers

A 4.743% tax increase,
yet John Hammer nor the News and Record bothered to do the math

It doesn’t matter how many times they repeat it, the truth is that Greensboro had a property tax increase in the  2017-2018 budget [taking] ...more than $11 million out of the pockets of property owners and put it in the city’s coffers.

In Guilford County 2017 was a property reevaluation year, state law requires cities and counties to publish what the revenue neutral property tax rate, so that cities like Greensboro don’t sneak in a stealth tax increase.  Revenue neutral is the property tax rate that would keep the city’s tax revenue at the same level as if property had not increased in value.


A 3.3345% tax increase the News and Record didn't report
and as a percent neither did John Hammer

The result is that by not lowering the rate to the revenue neutral rate the property tax payers of Greensboro paid an additional $5.7 million in taxes not just in 2017-2018 but also in 2018-2019.

When property owners have to pay more taxes that is a property tax increase whether it is done by raising the rates as was done this year, or by increasing the value of the property as was done in 2017.

Greensboro with the new 3 cent tax rate increase to 66.25 cents continues to hold its position as having the highest tax rate in the state for comparable cities.

But this year the City Council did something that you would not expect this City Council to do, along with the tax increase it implemented a recycling availability fee of $2.50 a month for every household.


If Mr. Hammer would recall, Greensboro raised vehicle taxes by 300% in 2016,
a $20 increase for every car in every household,
but inconvenient history is not his thing,
as he didn't report the water rate increase to pay for Roy Carroll's infrastructure
to the new Publix distribution center for $3 million

Fees like that are considered regressive because with a property tax, the people who own more expensive property pay more tax.


The Median household income of a Greensboro resident is $41,518 a year.

It’s worth noting that the $2.50 cent fee will raise almost exactly the same amount of revenue for the city as an additional 1 cent on the tax rate."


The average bill for a customer inside the city limits will increase $1.81 per month

City of Greensboro
A news item neither The Rhino Times or the News and Record bothered to tell anyone
.
.
The News and Record is guilty of journalistic malpractice
for burying an incomplete rendering of the story in the ninth paragraph of a story entitled;

The first sentence of the story;

The Greensboro City Council voted 7-2 Tuesday to delay until July a vote on a controversial ordinance that would set new standards for non-residential buildings.


And way down deep, where most didn't bother to continue reading;

"In other news, the council: [In the ninth paragraph within a story on a different subject, which didn't include the new water/sewer or recycling tax increase] Approved 8-1 its 2019-2020 annual budget. The $566.1 million budget includes a 3 cent per $100 property valuation tax increase that will pay for a larger contribution to the city employees’ retirement fund and a reduction in the amount of savings the city uses every year to cover its expenses. The budget also includes pay raises for city employees."

https://www.greensboro.com/news/local_news/greensboro-council-votes-to-delay-good-repair-ordinance-for-commercial/article_413ccbe6-b4d2-582a-b479-dfa08f8b3980.html?fbclid=IwAR1MUOV3FlTHEJsfC6d9YmeokLbgj1FYvpskCJmOpnCZHMd-qzXlnGi6Pcc
.
.
As the News and Record declined to tell its readers of the percentage tax increase just approved by Greensboro's City Council, or of the utilities and recycling increases;

12.8% in new taxes since 2016 the public is unaware of,
not counting previous water rate increases. 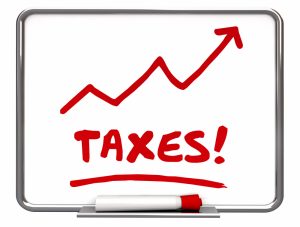