We had our 2013 Subaru Legacy towed to Capital Subaru of Greensboro with a transmission related P2763 code, which lit up multiple dashboard warning lights.  I wouldn't have picked a dealership as a first go to, but Subaru had extended the warranty on the transmission from 60k to 100k, and from 5 to 10 years as consumers had multiple issues.  Sounds like it should have been a recall, except too few people died along the way, so Subaru did what was in Subaru's best interests at the expense of their customers well being.

We were within the 10 years, but over the 100k miles, which is a grey area in which sometimes either Subaru national or the dealer with help customers out with goodwill.

After we had the car towed in, the Service Advisor told me the diagnosis would not be charged if we did the work, which ended up not being true, but reconfigured to not show in what was quoted.

To which I replied "You told me if I did the job diagnosis would be covered." The reply from Capital Subaru was "I should have explained better, to do the diagnostic it is still an hour. Since I did not make this clear we will just charge you 4 hours."

It is a common practice at auto service establishments to mislead customers on whether or not a diagnosis is charged for.  What happened here is the diagnosis charge was bundled into the total cost instead of being itemized separately to make it look like there was no diagnosis charge, even though there was as it was included in the total without disclosure.

I was informed in writing that Capital Subaru's labor rate per hour is $145.  I asked in writing for the screen shot showing 4 hours needed to perform the work.  The Service Advisor's reply was "I, myself cannot pull up this information. To do the work that is what we charge" to which I responded with "Please have your service manager review this email thread and have him or her give me a call."

While speaking with the Service Manager on a phone call, which I recorded, he informed me the job took 4 hours.  I asked for a screen shot of the numbers.  He emailed me an illegible picture from the dealership's software showing 4 hours for the job; 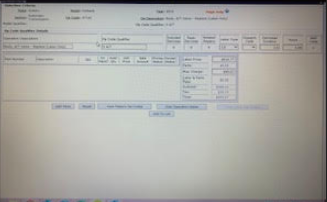 The problem was the computer program he used to generate the quote can be manipulated to show anything he wanted it to, so he did, deceiving us.  By changing the numbers around, he didn't provide what the labor guide cites, but what the Service Advisor quoted, which was dramatically inflated.

Another local Subaru dealership told me the job calls for 2 hours, which is half of what Capital Subaru quoted.  I recorded the call.  Capital Subaru lied.  The other quote cited a labor rate of $109 per hour instead of Capital Subaru's $145.

Then I was quoted a higher price than the original by the Service Manager who wrote "I have to pay my tech Diag time. The labor for the valve body does NOT include diag.  The total of the repair is $1,752.80."  I was originally quoted "$1,533.18 not including taxes or shop supplies" which would have equaled about $1,689, including the diagnosis.

Then the Service Manager told me he was using "Grid Pricing", in writing and on a recorded call.

This is what I found on Grid Pricing;

"4. Flat Rate Grid Pricing Matrix; This slimy tactic is totally underground, one that goes completely unnoticed because of how well it's hidden.  The flat rate pricing matrix system is used by many of the big dealerships to increase labor cost for larger automotive repair jobs.  The dealership will claim that they use the system because the repairs that take longer to do will be at a more difficult level, which is total BS!

...The [extra money charged] is mostly all profit, the mechanic doesn't get a piece of the pie, the mechanic still gets paid the hours the job worth. My point is, if the garage you're bringing your car to for repairs is using this grid pricing matrix, you're getting ripped off, there is no justifying this increase in labor cost, unless you're the one charging for it."

Eddie Carrara
Founder of Simple-Car-Answers
.
.
The Service Manager removed the Grid Pricing, which they appear not to disclose to customers whatsoever, and about an hour of labor, totaling $1,534.90 out the door.  It ends up the quote was about $300 more than it should have been, as the Service Manager willingly misled a Subaru customer for profit.

I called Subaru customer service line at 800-782-2783, and the gentleman told me he would not intervene.  I will be sending this story to customer@subaru.com

Since we needed the vehicle, and didn't have time etc... to have it re-towed somewhere else at cost, I told him to do the work.

Then I was told the vehicle was ready for pick up.  I asked for a copy of the bill to review.  I was sent a bill that didn't spell out how many hours were charged for what.  After asking for the bill to be itemized, the Service Advisor wrote "That's the final bill".  Capital Subaru's Service Department refused to say what the charges were actually for.

When we picked up the car, the mileage on the invoice said the vehicle had the same number of miles as when we had it towed in, yet there were 4 more miles on it.  Considering the job was done twice, I would think a longer test drive would have been appropriate.

After asking to speak to the Service Manager on pick up, he seemed to have suddenly disappeared.

The General Manager wasn't in as well, so I spoke to a Sales Manager who claimed total ignorance concerning how the Service Department priced work, which seemed unlikely as the used cars that go through the shop to be re-sold get charges added to the cost basis of the vehicle before being put up for sale, directly effecting the Sales Department's profit.

Instead of quality customer service, we received the opposite.

Instead of honesty and integrity, we reaped deception, greed and un-professionalism.

Instead of a win win, we got a win lose.

Instead of truth, we were told lies.

If Capital Subaru doubled their labor costs on our vehicle, how many others have they ripped off over the last few years?  The only way I could have known what they were doing was by working in the industry.  The vast majority of consumers doing business with Capital Subaru overwhelmingly don't know, and my guess is many have been shafted over the years and didn't know it.
Posted by George Hartzman at 11:52 AM