"The Foundation is providing guarantees of $5M each to the City and its bank from donor contributions and, as necessary, unrestricted reserves of the Foundation"

After misleading Greensboro's taxpayers on the STPAC financing, the Foundation is asking donors to double up and more without telling its patrons if the assets contributed are unrestricted, the donated funds may be spent on a playground for Greensboro's elite, instead of helping our community's neediest; 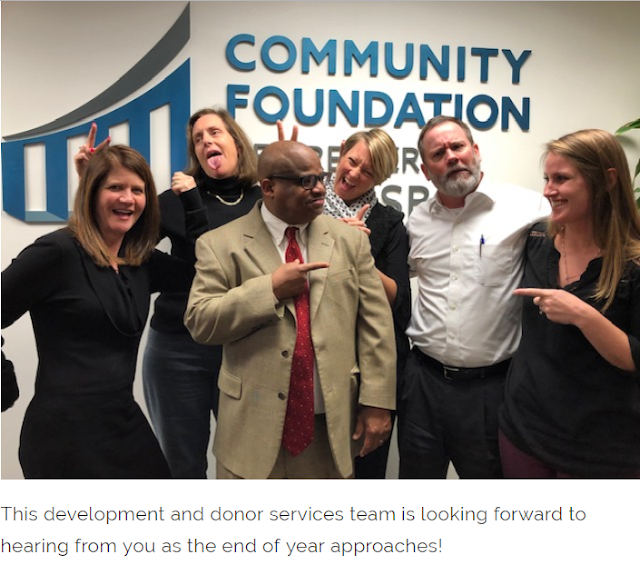 Are City of Greensboro taxpayers and parking deck patrons on the hook for at least $35.1 million not including legal costs, for a parking deck which most of City Council doesn't even know much about, for Kathy Manning, Randall Kaplan, George House and Greg Dillon, who has a contract on the News and Record property?


The News and Record real estate is under contract with Greg Dillon,
one of Randall Kaplan's partners in the hotel,
so don't count on any quality investigative journalism from what's left
of what used to be our community's paper of record,
just like the Washington Post shills for Jeff Bezos and Amazon,
as what used to be the Rhino Times is/was Roy Carroll's propaganda outlet


Matt Brown, Kathy Manning, Walker Sanders and the City
didn't disclose $23,108,494.98 in interest costs for the STPAC
when Greensboro's City Council voted on the debt.


Matt Brown sold City Council on math showing 330 VIP parking spots
selling out at $18 a piece
for 12 Student Plays or Concerts and 11 Dance Recitals and Talent Competitions
which are not projected to have ticket fees,
and then everyone voted for it except Sharon Hightower
after mayor Nancy Vaughan assured the Council and the public it was a good finance plan.


The City, with the help of Kathy Manning and CFGG's Walker Sanders
expects to sell more parking spaces than vehicles expected to show up for each show,
with none of them parking anywhere else.


City Council voted to for the project while knowing this information
or should have, and/or willfully ignored data,
violating their fiduciary duties to Greensboro's taxpayers

The Community Foundation of Greater Greensboro's Walker Sanders
violated his fiduciary duty to his clients and donors,
while knowingly participated in a scheme to defraud Greensboro's taxpayers
with full knowledge of the risks involving Foundation assets being used as collateral

As of November 14, 2017, only $20 million of the $40 plus million in private donations
had actually been "raised",
not counting expected interest payments on the loan CFGG took out to make up the difference;

Walker purposefully misled our community and his clients
at The Community Foundation of Greater Greensboro
and knowingly conspired against those he bears a fiduciary responsibility,
with their "unrestricted reserves of the Foundation".

Walker Sanders did not act in good faith, and did not exercise the same care
that an ordinarily prudent person in a like position would exercise under similar circumstances
with his clients at The Community Foundation of Greater Greensboro.

Walker Sanders did not avoid self-dealing,
misuse of funds and other misconduct.

Walker Sanders did not perform duties with loyalty to the entity’s mission
and obedience to The Community Foundation of Greater Greensboro's non-profit purposes.
.
.
"18 U.S. Code § 1341 - Frauds and swindles


Whoever, having devised or intending to devise any scheme or artifice to defraud, or for obtaining money or property by means of false or fraudulent pretenses, representations, or promises, or to sell, dispose of, loan, exchange, alter, give away, distribute, supply, or furnish or procure for unlawful use any counterfeit or spurious coin, obligation, security, or other article, or anything represented to be or intimated or held out to be such counterfeit or spurious article, for the purpose of executing such scheme or artifice or attempting so to do, places in any post office or authorized depository for mail matter, any matter or thing whatever to be sent or delivered by the Postal Service, or deposits or causes to be deposited any matter or thing whatever to be sent or delivered by any private or commercial interstate carrier, or takes or receives therefrom, any such matter or thing, or knowingly causes to be delivered by mail or such carrier according to the direction thereon, or at the place at which it is directed to be delivered by the person to whom it is addressed, any such matter or thing, shall be fined under this title or imprisoned not more than 20 years, or both. If the violation occurs in relation to, or ... affects a financial institution, such person shall be fined not more than $1,000,000 or imprisoned not more than 30 years, or both."
.
.
"The courts’ reluctance to define the term “fraud” with specificity gives prosecutors, judges and juries wide latitude to criminalize behavior which offends their personal sense of right and wrong.   For what does it mean in the law to “take advantage of others”?   It is not difficult to define what a false statement means.  Similarly, failing to make a disclosure when there is fiduciary obligation to make a disclosure is something that can be clearly understood (although sometimes it is difficult to know when one has a fiduciary duty to another)."
.
.
Some of who enabled and/or committed fraud against Greensboro taxpayers and the investors who purchased STPAC bonds; Greensboro, NC's $44.165 million LOBs, Series 2018, and some records requests

Kathy Manning's campaign response to the $30 million plus Greensboro taxpayer handout for a luxury hotel project, questions and commentary