The City Council will discuss Tuesday whether to build an eight-story parking deck near the downtown baseball stadium.


The City, as in Greensboro's taxpayers

The 1,050-space deck would provide the foundation — quite literally — for the 15- to 20-story mixed-use building Greensboro developer Roy Carroll is planning.


Taxpayer funded give away to Roy Carroll,
so he can have parking for his new building
after the 'City' gave Roy a City street and water and sewer infrastructure
so he could build his hotel across the street

Carroll’s building would sit atop the deck.


Greensboro's taxpayers are going to build a parking deck
on Roy Carroll's property,
so he can money on the backs of poor City resident's property taxes

...The deck would serve not only Carroll’s planned building, but an office tower adjacent to First National Bank Field that’s under construction.

...Tuggle Duggins law firm will use the top 2½ floors of the building, which will be about one-third the size of the Lincoln Financial Building.

Tuggle Duggins and other tenants would lease 265 parking spaces from the city.


Tuggle Duggins and Roy need the taxpayer funded parking deck
to make the buildings they are already building usable,
which means this deal was already baked into the parasite cake,
enabled by crooked City executives and bought and paid for City Council members

...Carroll’s building would lease 450 spaces from the city. Carroll would first create ground-level retail space within the deck, then add the high-rise on top.


Who gets the revenue from the retail leases?

Is Robbie Perkins going to be the commercial real estate broker?

Tenants of the two buildings would use 715 spaces. The other 335 would be available to the public for a fee, just like other downtown decks.


Taxpayers would have access to 32% of the parking spaces,
while the other 68% go to Roy and Tuggle Duggins

The plan would cost the city $2.5 million a year, including repaying construction debt. The city would pay for it with parking fees and with money from the general fund."

6. Resolution Authorizing Change Order in the Amount of $330,000.00 in Contract No. 2013-031 with Breece Enterprises, Inc. for Lindsay Street Water Line Replacement

It's in the consent agenda, meaning no public hearing or debate needed

Who allowed this item to be stuffed into the consent agenda?

With a copy to:

...WHEREAS, the LLC desires to lease 265 parking spaces in a new City parking deck to be located at 415 Bellemeade Street in downtown Greensboro, North Carolina, at the regular market rates for assigned, reserved, or general parking in City parking facilities;

WHEREAS, the City desires to provide parking to the LLC as part of the Eugene Downtown Development Project which includes construction of a new City parking deck, a new office building owned and operated by LLC, and a future retail, office, hotel, and residential building located below and above the new City parking deck;...

Roy Carroll already got the parking deck deal in May;

"...on May 2, 2017, the City Council adopted Resolution #098-17 and authorized the City Manager to enter into a Downtown Development Agreement (DDA) with CHI Greensboro, LLC to design and possibly build a public/private parking structure in the Eugene/Bellemeade area;

WHEREAS, the parking structure will contain approximately 1,050 public parking spaces in an eight (8) story building;

WHEREAS, CHI Greensboro, LLC plans to include basement parking and ground level retail space with the parking structure (Phase I) and has future plans to build an approximate 15-20 story mixed use facility on top of the parking structure (Phase II).  Upon completion of the project, the City of Greensboro will own and operate the public parking spaces in the structure.  At full build out of Phase II, the mixed use facility would require approximately 450 parking spaces which would be leased from the City at market rates;

WHEREAS, the Eugene Downtown Development Project would include Phase I and Phase II to be designed by CHI Greensboro, LLC as well as the new Downtown Slugger, LLC office building.

City Council gave Roy $2 million in May to design the deck;

"RESOLUTION TO ENTER INTO A DOWNTOWN DEVELOPMENT AGREEMENT (DDA) WITH CHI GREENSBORO, LLC TO DESIGN AND BUILD A PUBLIC/PRIVATE PARKING STRUCTURE

No mention of Roy Carroll anywhere

...the City Manager is authorized to enter into a Downtown Development Agreement (DDA) with CHI Greensboro, LLC to design not to exceed $2 million and possibly build a public/private  parking structure in the Eugene/Bellemeade area."
https://greensboro.legistar.com/Calendar.aspx

From the minutes of the meeting;

"11. ID 17-0257 Resolution to Enter into a Downtown Development Agreement (DDA) with CHI Greensboro, LLC to Design and Build a Public/Private Parking Structure

Mayor Vaughan thanked the speakers for their patience.

Councilmember Hightower voiced concern with the lack of M/WBE goals; and requested staff look at the criteria and requirements for Professional Service Contracts.

City Manager Westmoreland explained that staff would work with the company; and inform them of the City's M/WBE requirements.

City Attorney Carruthers referenced that this was for professional services; and confirmed that compliance with the M/WBE Program was a requirement of the agreement.

The motion carried on the following roll call vote:

Some would thing Tony Wilkins should be removed from the Republican Party,
but isn't this really what both parties really stand for?

No mention of the campaign contributions associated with this deal

This stuff doesn't just happen in a vacuum

The press dropped the ball on this give away, as usual

How much are our property taxes going to go up to pay for Roy and Tuggle Duggins profits?

We deserve what we get, good and hard

We are paying Roy to keep up his Yacht 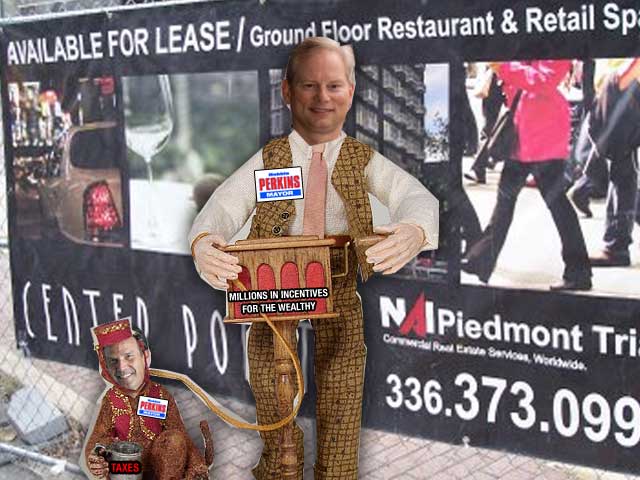 When in doubt, buy a newspaper and buy as many local politicians as possible, by Roy Carroll and John Hammer

It's been 55 days since the News and Record didn't report Marty Kotis getting $600,000 from Greensboro's taxpayers to design a bike path inside a consent agenda

Nancy Hoffmann's Mid Year Campaign Finance Report; How much taxpayer money has she voted for...

Why would John Lomax give Nancy Hoffmann $1,000?

"Companies scorned HB2, but donated to lawmakers who passed it"

"Why are so many of us willing to accept mediocrity in our political leaders?"

"Key downtown property owners [who have received a great deal of Greensboro taxpayer money] back DGI for contract" [for their lobbyist, Zack Matheny]

How much did the city spend to get the sewer line installed under I-40 for Roy Carroll's AMEX backup data center project?

An act of Cowardice by John Hammer for Roy Carroll: "Breaking The Government Monopoly On Inspections"

This is so wrong...It's like our City has lost it's mind...with the help of the News and Record for the lack of rational oppositition

"In the mid–20th century, fascism actually meant something.

See how the Rhino under-reports incentive deals
related to Roy Carroll's friends or Roy,
and scrutinizes deals that compete with Roy and friends?

Should the chair of the City's Economic Development Committee accept campaign contributions from employees of entities receiving money from the city via city council votes advocated and voted on by Zack Matheny?

Two more examples of what the News and Record won't report, as they are knee deep in it in Greensboro

Greensboro Partnership and Rentier Capitalist Propaganda in the News and Record

http://greensboroperformingarts.blogspot.com/2014/02/robbie-perkins-year-end-campaign.html
Posted by George Hartzman at 8:54 AM